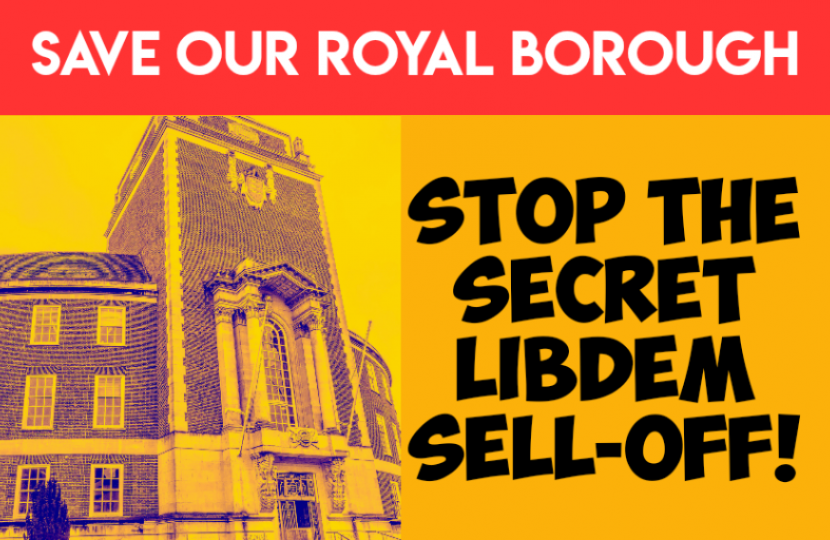 Conservative councillors and local residents walked out of a Kingston Council meeting in disgust, as LibDem councillors handed themselves draconian new powers to sell-off public land and historic buildings to unknown developers.

At the meeting on 13th May Kingston’s LibDem Councillors forced through the decision to flog-off the Council assets, including the iconic Guildhall building. The controversial new powers that the LibDems granted themselves also prevent local residents and opposition councillors from being able to scrutinise or have a say on the risky mass-development plans.

Kingston’s LibDem-run Council has already spent and allocated millions of pounds of council tax-payer’s money to give to developers who are putting together plans for large blocks of flats on many of the sites.

As well as handing over the historic Guildhall building to developers, the Cattle Market Car Park, Ashdown Road Car Park and all the council buildings surrounding the Guildhall will be made available for tall towers.

Rather than allowing all Councillors access to the detailed plans so that they can fully scrutinise and to decide the direction of £100s of millions of financial risk and spending, the Lib Dems have delegated sole authority to their all-powerful leader and a single council officer. The Conservatives on the committee refused to participate in such a dangerous decision that moved power away from elected Councillors and local residents.

Conservative councillors recommended that a special committee of councillors be set up to give proper oversight to this project, not concentrate power to a ruling elite. If residents are to have faith in these decisions, then they need the scrutiny of all Councillors in public meetings. This flawed process does not do that. Regrettably, the LibDems refused to consider this simple request.

The obvious question to ask is; ‘What have the LibDems got to hide?’

Councillor Kevin Davis, the Conservative Group Leader, said:  “This is the biggest project that Kingston Council has ever undertaken in the Borough since the Vikings sacked the Borough over 1,000 years ago. The LibDems are selling off key assets in the Borough to save money on office costs, but they’ll have to spend millions of pounds renting inconveniently situated temporary offices and halls forever more.

“This arrogant council leadership does not even trust the decision to their own Councillors, let alone be prepared to allow local residents to give their views. Like the Chinese government, they are delegating the decision to their Leader, someone who has spent more time making videos few people watch rather than attending to the detail of running the Boroughs services.”

Councillor Rowena Bass, the Conservative spokesperson for Finance, said:  “This project has huge risks for the council finances. Who pays when the Lib Dems lose millions of pounds? Kingston residents lose. The Council is turning into a property developer and land trader all for the cost of a swimming pool. Some property developers make a lot of money, many more make disastrous losses.

“If we are to have faith in the decisions, then it needs the scrutiny of all Councillors and residents, this flawed process does not do that. We need a special cross-party committee of Councillors to give oversight to this project, not concentrate power to a ruling elite. Regrettably, the Lib Dems would not commit to this simple request nor answer residents’ questions, so we left the meeting as there seemed little point staying to see the Borough sold down the river.”