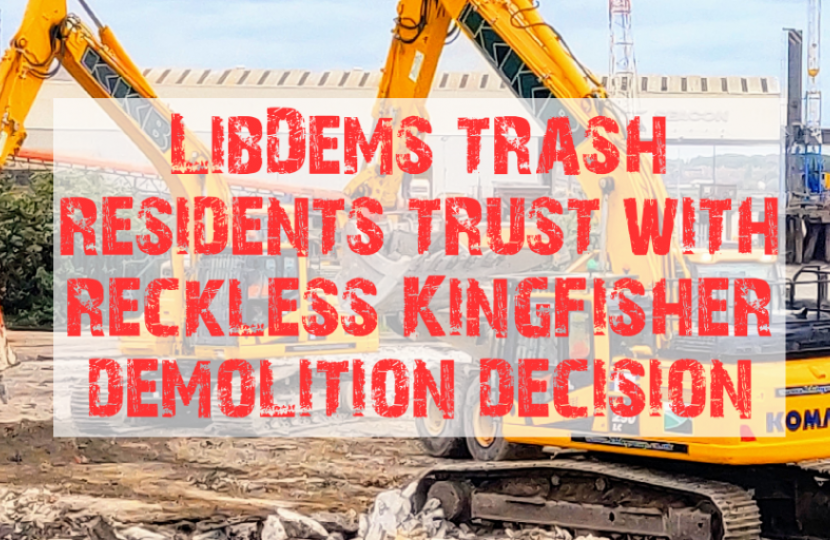 Kingston’s LibDems have forced through a vote to demolish the Kingfisher leisure centre, even though there is no plan for a new pool, no money to pay for it and no timetable that the public can trust.

At a sometimes angry and torrid Council meeting on Tuesday evening, local residents poured scorn on LibDem attempts to airbrush over the impending disaster. One Councillor, who resigned from the LibDem group as he believed the LibDem leader was misleading the public over the issue, accused them of “bull-shitting” and letting down hundreds of young kids who will never learn to swim in a Kingston pool.

The LibDem-run council will now push ahead with the demolition, based on secretive deals they’ve agreed with developers, which involve building tall towers next to the Guildhall and on the Cattle Market car park. However, importantly the developer deals aren’t signed-off and could yet fail. If it turns out that it doesn’t make financial sense, then the fact that the pool is already gone will put all the power in the hands of the large developers.

A suggestion by the LibDems that knocking down the pool prematurely will speed up the delivery of a new pool is laughable, as the blundering LibDems shut down the pool years ago and still have no finalised plans to replace it.

Cllr Kevin Davis, Leader of the Conservative Group said:  “Last night the LibDems on Kingston Council voted to demolish the Kingfisher leisure pool. The LibDem Leader, Cllr Kerr, demanded her councillors voted for it despite having no plan, no money and no timescale for a replacement. A number of influential LibDem councillors left before the vote so they didn’t have to push through their Leader’s vote for demolition. Out of 39 LibDem Councillors elected in 2018 only 22 could bring themselves to vote for this catastrophic project. Residents want a pool, not a memorial to Cllr Kerr’s kamikaze council.”

Cllr Rowena Bass, Deputy Leader of the Conservative Group, said:  “For the residents, this is all about trust. After so many disastrous letdowns by the Lib Dems the residents are angry with what is happening and they don’t trust them. They promised new council houses and we haven’t got them yet, they promised ‘Homes not Towers’ and then build towers. People remember the Richmond ice rink debacle and see history being repeated in Kingston. Now we also know they are developing secret plans to build towers on the Cattle Market and the Guildhall just to pay for their failings over the Kingfisher. We can’t go on like this.”

LibDem-run Kingston Council has attracted yet more national press coverage for the incompetent and heartless way it has treated a young mum and her children.