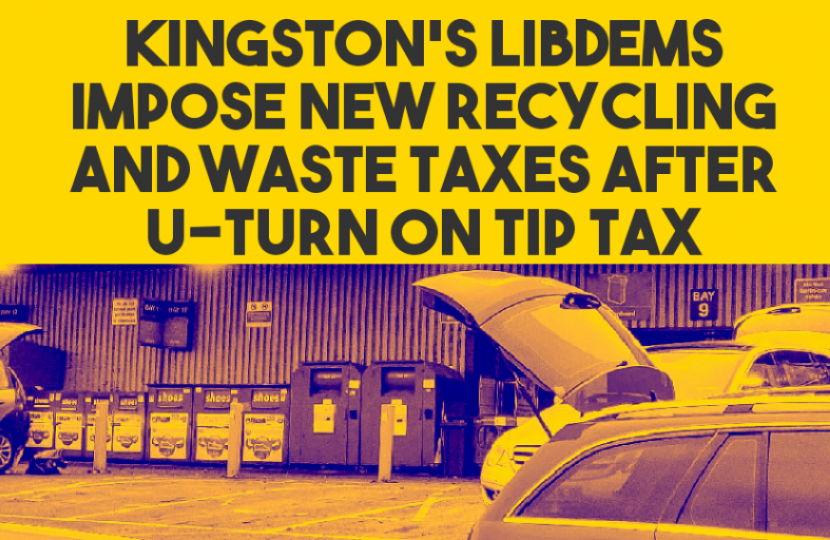 Kingston’s LibDem Council made a dramatic U-turn on their plans to introduce a new Tip Tax on using the Waste & Recycling Centre in Villiers Road.  The U-turn came after a large petition against the proposals and the opposition of Conservative councillors who threatened to overturn the new tax at the next election.

The LibDem Tip Tax would have charged Council Tax payers more money for disposing of ‘non-household’ items such as DIY waste.

But despite the U-turn, LibDem councillors have pushed ahead with plans to invent further hidden taxes relating to the Council recycling and waste service. The new Waste and Recycling taxes include:

Plans that could see the opening hours for cars visiting the Villiers Road centre cut later in the year were also announced at the committee meeting on Thursday 11th February. This announcement comes after the LibDems cut the opening hours last year.

Cllr David Cunningham, Conservative Spokesman for the Environment, said: “I welcome the LibDem U-turn on their plans for a Tip Tax, but it’s disappointing to see they are still leaving in their other taxes and plans that will discourage residents from recycling. Residents already pay the highest Council Tax in London, yet they are being stung with a 5% increase and new taxes on basic Council services.”