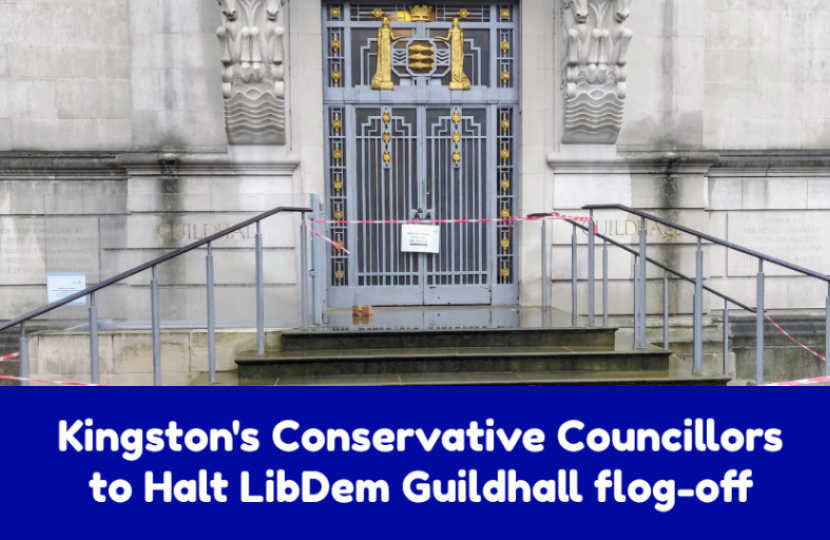 Conservative councillors have announced they will stop the sale of Kingston’s historic Guildhall if they win the Council election in 2022.

Kingston’s Conservative Group has served written notice on Kingston Council, to ensure that any deals the LibDems do with developers should not tie the council down to the unwanted sale, or incur costs.

The letter advises that they do not support the proposal to dispose of the listed Guildhall building which sits at the heart of the Guildhall complex.

The letter goes on to advise that, the Conservative Group has grave concerns about the so-called regeneration plans being developed for the Guildhall site. The Conservative councillors remain to be convinced that the plans will enable good quality services to be delivered while providing value for money in both the short and long term.

In order to prevent the loss of the heritage building and incur costs, the letter states:

‘…with an election approaching in May 2022, officers are made aware (and make clear to any potential purchaser of the freehold or lease), that an incoming Conservative administration would seek to reverse any decision made to sell the Guildhall building. Given this statement, we would expect officers, negotiating with the potential purchasers, to make our position clear to those purchasers and to ensure that whatever is agreed does not financially fetter the Council from what would be its new ambition to give fresh civic life to this listed building. Any abortive costs would need, by contract, to lie with the contractor and not with the Council. The contract negotiated should ensure there is a clause that allows the new administration in May 2022 to reverse the sale of the Guildhall building. ‘

*Click on the link below to see the full letter.