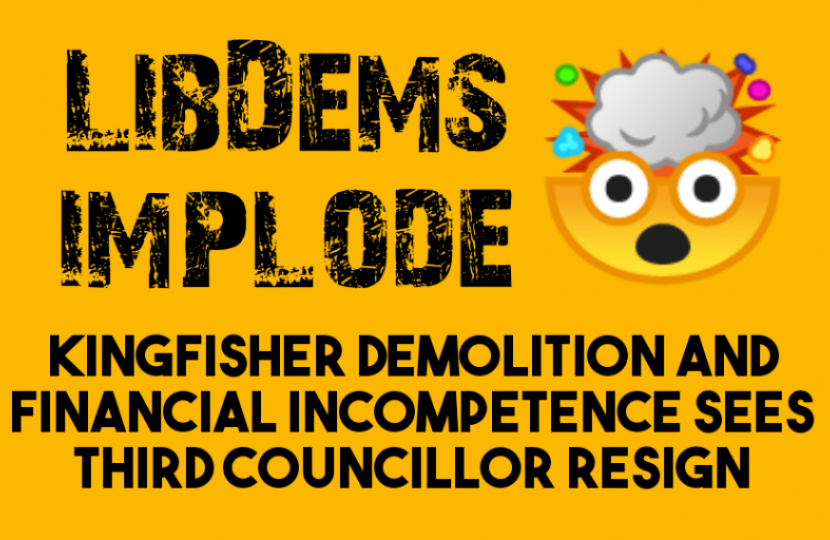 Kingston’s LibDem councillors have suffered a third resignation, following the last couple of years of infighting, backstabbing senior councillors, including the previous leader.

The latest resignation follows a year of financial incompetence leaving councillors and residents concerned at how Kingston Council is selling council owned buildings, only to have to pay high rent for offices and meeting places forever more.

And now, blundering LibDem councillors have forced through a decision to demolish the Kingfisher pool and leisure centre, even though they have no guaranteed funding in place to replace it.

The decision was taken at the recent Planning Committee where LibDem councillors forced through the demolition despite an objection from Sport England and Conservative councillors, who voted against the proposal. Both Sport England and the Conservatives highlighted that there were no funded plans in place to replace the pool, so the unnecessary demolition would put the future of a swimming pool and leisure centre at risk.

Following a backlash from local residents, squirming LibDem councillors are now saying that the early demolition will speed up the replacement of the pool. However, that is far from the truth, as they are nowhere near finalising a deal with developers to build the tall towers that will be required.

By knocking down the Kingfisher now, it will leave the Kingston Council Tax payer in a vulnerable position, leaving the council forced to accept anything the developers demand. It’s clearly a reckless way to run council finances.

Kingston residents, including our children, are having to put up with no access to a swimming pool, with little hope of one opening for years to come – if at all. It’s simply not good enough, and it’s no wonder LibDem councillors are starting to revolt against the Council Leader who backstabbed her way to the top, only to act like a tyrant ignoring the views of others.

Kingston’s LibDems have left Kingston without a pool or leisure centre, and are selling our souls to big developers who are eyeing up our sky for their tall towers. If this wasn’t bad enough, they are gambling tax-payers money on risky developer deals, without allowing proper scrutiny. Kingston’s residents have every right to feel very worried.