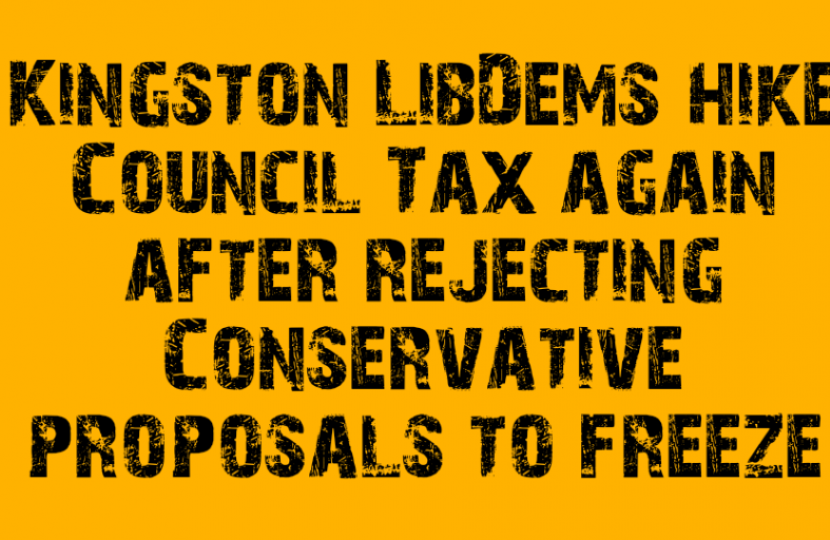 At a Council meeting on 1st March LibDem-controlled Kingston Council forced through a further Council Tax rise on residents who are already being charged the highest Council Tax in the country. The LibDems ignored Conservative pleas for a Freeze in tax to help with the rising cost of living.

This decision, disastrous for so many cash-strapped Kingston residents, came despite a Conservative amendment to freeze the Council Tax.

“We know Kingston residents are struggling with the cost of living crisis. Covid inflation caused by international supply chain issues, coupled with a severe rise in energy bills has left many families in Kingston having to make decisions about feeding themselves or turning their heating on. The war in Ukraine has potentially made rising fuel bills an even bigger issue. That’s why we proposed an amendment to freeze Council Tax.”

“The Council should be supporting residents at this time, but instead the LibDems simply forced through yet another punitive tax rise. In four years they have hiked up Council Tax by 17%.”

“The LibDems unfairly raising taxes is bad enough, but when that rise is being spent on employing more than 50 extra staff to carry out work such as ‘public relations’ and doing deals with developers, then residents will rightly feel hard done by. Bizarrely they want more staff to manage council assets at the same time as selling off those assets, such as the Guildhall, to developers.”

In addition to the raising of Council Tax, by the maximum they are allowed by Government, the LibDems have cut services:

“After four years of LibDem control, the council budget is a mess. They have no direction and no understanding of the needs of our residents. This is a budget piling on misery on top of the cost of living crisis. It’s time for the LibDems to stop pilfering the pockets of our residents with their crazy spending and putting Council assets up for sale. It’s time to be on the side of residents, it’s time to Freeze Council Tax.”