Kingston’s Conservative group of councillors has confirmed that they would cancel the proposed LibDem Tip Tax, should they win the local election in May 2022 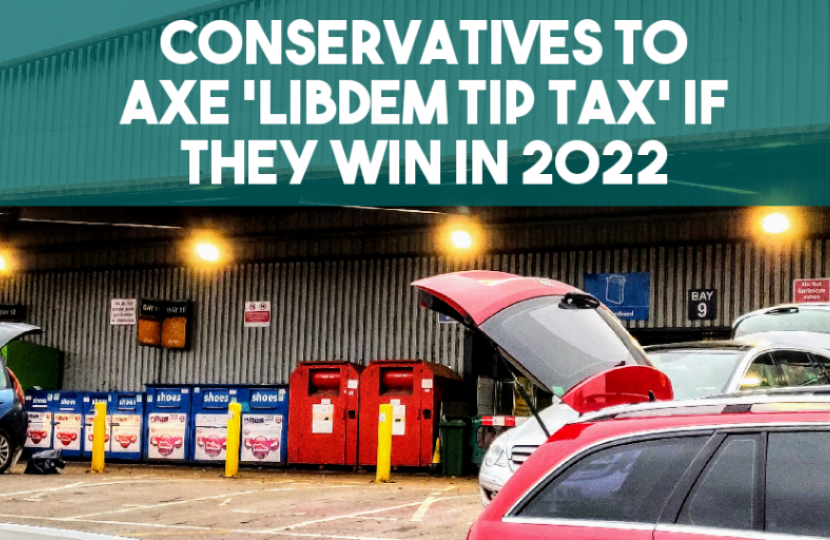 The new tax is being imposed by Kingston Council as part of the 2021 LibDem Budget proposals. The changes will see extra charges being made for Kingston residents who use the Waste & Recycling Centre in Villiers Road, for items that are not deemed to be traditional household waste.

The new regime will see more staff time required to snoop on what residents are recycling and disposing of, let alone process the extra payments. This will penalise residents who carry out quite normal everyday activities, such as DIY improvements to their homes and impose a Tip Tax for items such as waste wood, wallpaper, carpets, roofing felt and garden fences.

The additional LibDem Tip Tax comes at the same time as the imposition of above inflation rises to the charges for using the Green Bin service for garden waste, and new limits restricting the number of times residents are allowed to use the Villiers Road site.

Cllr David Cunningham, the Conservative Spokesman for the Environment, said:

“It’s no wonder that residents are aghast at these LibDem proposals to add a new tax for a service they already pay the highest Council Tax in London for. Only last year the LibDems reduced the opening hours of the Waste & Recycling centre. As sure as night follows day, the Royal Borough will suffer from increased fly-tipping should this proceed.”

“This new LibDem Tip Tax is an insult to the Kingston Council Taxpayer. It makes no logical sense to punish residents this way. On top of slamming in a 4.99% increase in Council Tax now, they are coming for basic resident’s services. On behalf of the Conservative Group, I confirm that a Conservative-run Council, following the elections in May 2022, will axe this poorly thought-out tax.”